Everywhere you look, the entire world is talking about one thing: the Russia Ukraine war. Either they’re depicting Putin as the new Hilter or they’re discussing the refugees being welcomed into new countries. And the European Union and American involvment in the matter changes daily. This is hardly the first big global crisis affecting the job market but it is of a very different nature to the ones we’ve seen most recently. So, without further ado, let’s look at the impact of this war on recruitment.

Over the past 5 years, we’ve been through some topsy turvy times. If you remember, during the Trump era, the tariff wars made headlines. To refresh your memory, here’s what happened: the US imposed harsh tariffs on everything coming from China and many industries suffered. Some companies even needed to relocate to handle the situation. For more, you can check out our article on the trade wars.

Little did we know then that there would a catastrophic outbreak affecting the entire world, impacting travel and imports/exports on a global scale. No need for tariffs, fear alone and potential death caused countries everywhere to shut their borders. In some cases, foreigners needed to rush back home (places like Australia reserved any financial aid for the locals) and restaurant workers had to find a new way to support themselves. Two and a half years later, we’re finally taking out the restrictions, but the world of recruitment has changed forever.

And even before all of this, Brexit had been dragging on for quite some time. It’s been a while since Brexit was actually put into action now and the job market definitely took a hit. Some companies and restaurants found it difficult to fill positions like “sous chef” and there were even places resorting to paying for the visas of foreign workers.

Today, the Eastern European war between Russians and Ukrainians is our newest hurdle.

Some jobs in crisis

It’s a known fact that the position of truck driver is often hard to fill. Over the years, the situation has only worsened as truck drivers no longer see the advantages of the job in the same light. Many truck drivers across Europe come from Ukraine. With the war underway, most have left their jobs to fight alongside their fellow patriots. Unfortunately, even our advice for recruiting truck drivers won’t be enough to solve this problem. Without truck drivers, many materials and products cannot be transported from one place to another. Even though it would be great for companies to find a way to use more local resources, it’s just not realistic yet so the truck driver crisis could mean more delays and more price increases. 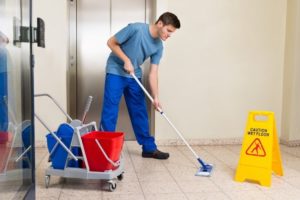 During the pandemic, we spoke a lot about the “unsung heros” in the medical field, but what about all of the cleaners out there keeping everything sanitized around the clock? For the most part, cleaners kept on working and all the open spaces doubled down on their cleaning routine. Many of the people who occupy these jobs come from countries like Russia and Ukraine. It can be a very thankless job and one that people don’t always do well. So, recruiting for these kinds of positions is harder than you’d think. With fewer workers from the East, companies, shops, public buildings and more might find themselves picking up the slack and cleaning their own spaces. On the other hand, the refugees could also be a godsend and actually add new manpower to the industry.

A New home for refugees from Ukraine

Speaking of refugees, we are in the millions now of Ukrainians seeking shelter elsewhere. Obviously, the bordering countries, like Romania, Maldova, Hungary, Slovakia and, of course, Poland, have been the most welcoming. But even countries a bit further away are opening their doors.

The UK, for instance, is trying to do the right thing, but even the best intentions can lead to critisim. Most notably, the UK households are being offered 350 pounds for hosting Ukrainian refugees.What this offer doesn’t show is just how difficult it is for Ukrainians to go through the visa process to even get into the UK. And by not simplifying the process, the British have now found themselves labelled as “anti-refugee”. Another country being criticised is Denmark. It has received backlash for opening its doors to Ukrainians while giving the Syrians the boot.

One thing is for sure: we’ve heard of refugees from all corners of the world (Syria, Afghanistan, Ukraine, etc.) being shipped off to a safe place, but then what? How do we help these people settle into a new home? How do they find work and create friendships? The first step is moving away from the war but people need more than a safe haven.

The Western world is trying to put an end to this war through sanctions. Among the different strategies, you’ll see that many Russian websites are no longer available. Limiting their impact and communication with the world hopes to stop the spred of lies or propaganda. But these sanctions also make it very difficult for Western countries to recruit workers from Russia. As if international recruitment wasn’t hard enough, now we’re dealing with blocked websites!

For those who are foreign but now in the country, the situation is also challenging. As we said previously, refugees from Ukraine (and Russia) headed to countries all over Europe could also add manpower to some industries. However, these people come from a very different place to their new home. Some of them might not even speak the local language. For this reason, companies should consider implementing services to accompany Ukrainians through the visa process, the housing process and they could even offer language classes. The cultural shock can be very overwhelming, especially when you’ve run away from your home under duress. If recruiters want to make a bad situation better (and maybe even gain something from the experience), now’s the time for them to bone up on the differences between Ukraine and their own country so that they can show support and hire motivated workers.

We hope you enjoyed our article on the Russia Ukraine situation. Please leave us any comments you may have in the comment section below.