Just a few years ago, an American job board was created that targeted jobseekers with a criminal past. That job board was 70 Million Jobs. The man behind the idea is Richard Bronson, an ex-partner at the infamous Wolf of Wall Street firm, Stratton Oakmont. When the company went under, Richard Bronson found himself in prison for two years. In his own words, “I knew it would be tough when I got out of prison, but I had no idea it would be that tough”. That’s why he created 70 Million Jobs, to help fellow inmates get back on their feet and find work. We were lucky enough to interview Adrienne Hatter, an employment specialist and the community outreach manager in the team, to find out more about the job board. 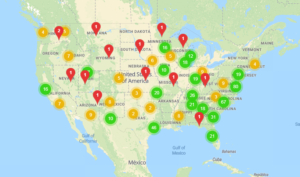 We are the first: a national, for-profit job board specifically for individuals with criminal records. We target the largest employers in the nation who pay us to post their jobs and get access to our large community of job seekers. The job site was created by Richard Bronson, the founder and CEO of 70 Million Jobs. The idea came about after he himself was incarcerated – when he got out, he experienced first-hand the incredible pain of trying to find work with a criminal record. He finally found a home at a well-known reentry non-profit called Defy Ventures, and became a director. While there, he quickly realized that the reentry space was calling out for a for-profit approach; with such a vast number of people affected, he wanted to create something that could change not just 10 lives, but millions. 70 Million Jobs aims to short-circuit the pernicious cycle of recidivism that exists in this country: there is approximately an 80% chance of an individual returning to prison or jail within the first 5 years of release. However, this number drops down to less than 20% when that person has a steady job; employment is truly the silver bullet for reducing recidivism.

70 Million Jobs refers to the 70 million Americans with a criminal record – that’s a staggering 1-in-3 adults.

Our approach is a simple one: it makes good business sense. In a time of historically low rates of unemployment, coupled with high turnover rates – somewhere in the ballpark of up to 200% turnover for entry-level jobs – employers simply can’t afford to ignore this massive population of job seekers any longer. Not only that, but the quality of this group of job seekers has been statistically proven – according to SHRM, the national HR organization, they are typically better workers, and they’re retained longer.

Richard’s journey is a fascinating one, and it has garnered some serious media attention; of course, one of the interview questions is inevitably about the film, which, according to Richard, was pretty close to real life.

Number one, we would never call the job seekers who come to us criminals. They may have committed a crime in the past, but we don’t believe the past should define them. We try to help anyone who comes to us looking, and we do not run background checks.

We help everyone who comes to us, no questions asked.

We have an incredible pool of more than 10 million deserving men and women, to whom we market job opportunities. Rather than merely posting the job and hoping applicants will find it, we use a huge mount of outbound marketing to ensure job seekers are seeing it, including phone calls and texts, emails, and social media.

Our clients are among the very largest employers in the US. I don’t think they’re in the business of recruiting talent to commit crimes on their behalf.

I think you’re referring to the Work Opportunity Tax Credit (WOTC), which gave employers tax credits when they hired folks with criminal records; however that program is ending.

Our goal is to facilitate the employment of 1 million formerly incarcerated men and women.

We would like to thank Adrienne Hatter for taking the time to answer all our questions! We would also like to thank Richard Bronson for creating a jobsite with such a noble mission.

If you have any suggestions for our blog, just leave us a comment below!