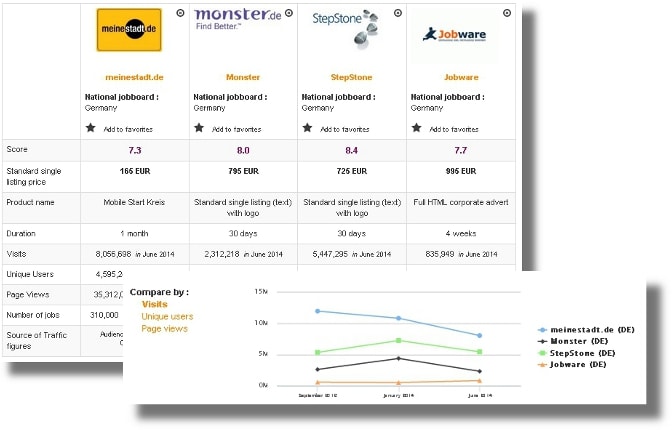 Add to your favorites

At Monster, we’ve made it our mission to help you find better candidates. And nobody brings you more cutting edge tools to help you do just that than Monster.

SeeMore™, 6Sense®, BeKnown™ and Career Ad Network® are just four examples of the innovative thinking that Monster brings to the table. Whatever your needs are, Monster has the products and technologies to tailor a solution for you. To help you Find Better.

Summary: Created in 1994, Monster is one of the oldest job boards in the world. In recruitment, Monster is a household name, even if it is no longer in its prime. It now belongs to Randstad (since 2016) but some of the Nordic portals don’t belong to the same group. In Spain, Monster attracts 296 840 visitors a month (only 70% of which comes from the country). Mexico, Argentina, the UK and Colombia are the other four countries visiting Monster Espana the most. On social media, there are 10 708 on Facebook, 4 354 on Twitter (but the site has not posted anything since 2014), 282 on YouTube and 1 745 on LinkedIn (which does not appear among the icons on the site). Even if you can use the English version of the site, many pages only exist in Spanish.

Design: Slightly different to some of the other Monsters (unless you’re using the English version), the homepage doesn’t feature the purple monster, but instead, it displays a smiling businessman behind the search engine (keywords, location, category, country).  The rest of the page is full boxes relating to the job search (featured employers, job categories, new jobs and advice). Even if there is some useful information at the bottom of the page concerning interviews and salaries, it isn’t as extensive as it is on other Monster sites, or other job boards. A number of the pages look like they could use an update, which actually makes them difficult to use. Job offers have publication dates in the listing, but you must open the offers to see the logos (and banner image). The filters (radius, location, publication date, type of hours) are those you usually find on Monster, which aren’t very intuitive.

The job board objective: Monster hopes to remain at the top by offering both job offer posting and CV database access. As an international job board, it has the added benefit of a global presence.

Recruiter observations: There is a CV database and the prices are online. You need an American phone number and a VAT number. If you already have an account with your e-mail address on a different Monster, you won’t be able to create a new one.

Jobseeker observations: It’s easy to create an account, and if you already have one on another Monster site, you can use the same one here.

The job offers: Since you need a keyword to use the search engine, it is impossible to know how many jobs per category there are.

Special features: The Truste stamp of approval; the YouTube videos; the app.

Verdict: Some links on the site don’t work (like the employment blog from the “About us” page) and a number of pages are in need of a makeover. In Spain, Monster is still a relevant job board, so you can use it without worrying about wasting money, especially since it is cheaper than some of the local competitors.

Login here for FREE to unlock access to the traffic audience, content and pricing section for more information on Monster. 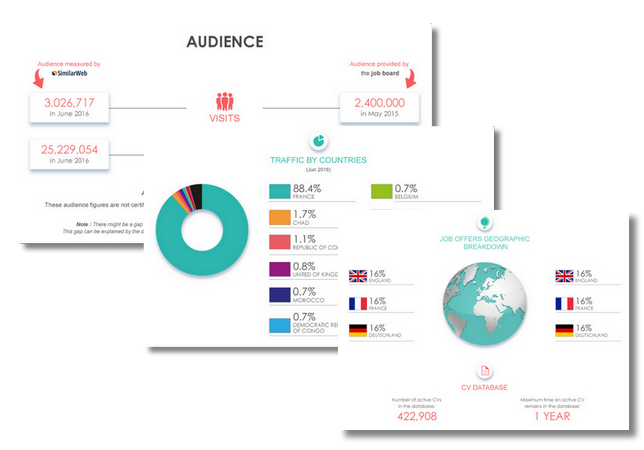 Find out what JobboardFinder users think about this job board.
Leave your own opinion in a comment to guide other recruiters and jobseekers for their choice.

Do you know Monster?

These job boards might be of interest to you...

This job board is unfortunately not available for our Premium offer.

To know the offer’s terms and to find job boards analyzed for Premium, go back to the Premium page and take a look at the featured offers.

As a reminder, the countries where you can view furthered analysis are Germany, UK, France, Belgium, Austria and the Netherlands.

If you experience any difficulties with the offer, please go to our Contact page and write to us.

Thank you for your quotation request.
You’ll be contacted shortly by our consultants.

I write my advert in 4 steps
I choose a Job board
Where I want to publish my advert
I add extra options or I order directly
I want more details about this service
Jobboard Finder ensures you to benefit from our lowest prices and personal assistance. Our team will take care of your order and pay close attention to your requirements.

Our Job Posting Services are subject to fees.
The final price will depend on the type of media chosen.
Post a job now